What is digital communication ?

The idea of converting an analog source output to a binary sequence was quite revolutionary
in 1948, and the notion that this should be done before channel processing was even more
revolutionary. 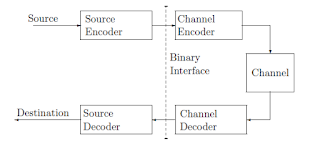 By today, with digital cameras, digital video, digital voice, etc., the idea of
digitizing any kind of source is commonplace even among the most techno-phobic. The notion
of a binary interface before channel transmission is almost as commonplace. For example, we
all refer to the speed of our internet connection in bits per second.

Email ThisBlogThis!Share to TwitterShare to FacebookShare to Pinterest
Labels: Semester - 6